The inception of the idea of the institution started in 1965 during a meeting held in Kampala, the capital city of Uganda, regarding the treatment of Burkitt’s lymphoma. The Uganda Cancer Institute started with the initiation and development of the Lymphoma Treatment Centre (LTC) which was a result of corporation and hard work of many individuals at the Makerere University medical school, Ministry of Health (MOH) and the National cancer institute (NCI) in the USA.

The Lymphoma Treatment Centre (LTC) was dedicated to Denis Burkitt, the first surgeon who described the unusual children tumor. Its main target was the jaw and the abdomen in 1950s. Burkitt described that this particular cancer could be cured with chemotherapy other than surgery. The NCI and Makerere University; the largest tertiary institution in Uganda, agreed to open the lymphoma clinic in one of a few vacant buildings that once housed old Mulago hospital. This location allowed the patients to stay longer for treatment and observation. The lymphoma treatment centre, as it was called then, opened its doors in August 1967 with the creation of an 18-bed ward in the old Mulago hospital.

The success of this unit lead to the foundation of a sister unit, the Solid Tumor Centre (STC) in 1969. This was to enable additional investigations in adult cancers especially Hepatocellullar carcinoma, Kaposi’s sarcoma and malignant melanoma to be carried out. Functioning jointly, the two units together with the associated laboratories formed the Uganda Cancer Institute (UCI).

The organisational and leadership structure over the years has had a number of challenges mainly related to political insurgencies and financial setbacks. Initially the institute was occupied by the NCI staff (American and British researchers) conducting research and caring for the cancer patients. However, their stay was short lived in 1971 due to the political instability then. At the time, Asians were being sent out of the country and this created panic among the NCI researchers and other expatriates who felt insecure and suddenly decided to return to their respective countries. This resulted into the institute having no leader.

Dr. Charles Olweny, a student at NCI was asked to take over immediate management of the institute otherwise it would be closed. Dr.Olweny, who is the current chairman of the interim board of directors of UCI, reported that the institute was then funded by the Uganda government under the Ministry of Health (MOH). He negotiated with MOH to get a separate budget from the main hospital. Under his leadership the Ugandan researchers were the first group to show that liver cancer could be treated by chemotherapy (Doxorubicin) successfully, and documented the incidence of endemic Kaposi’s sarcoma in children. Dr. Olweny left the country in 1982 due to insecurity. He was succeeded by Dr. Edward Katongole Mbidde. Dr Edward Mbidde maintained an extra ordinarily high standard of care. For years, UCI was the major cancer centre in the region as the AIDS epidemic broke out, the institute was the first to take AIDS- related cancers like Kaposi’s sarcoma and Burkitt’s lymphoma which they had been studying for decades.

The economic decline in the country finally took hold of the Uganda Cancer Institute. Cancer was classified by the Ministry of Health among non- communicable diseases; a low priority group. The neglected institute had trouble attracting medical students and young researchers and could not afford to train staff. This way they continued to see patients but the strong research that had made the institute the jewel of Africa halted to maintain the most basic patient care.

Dr. Jackson Orem later replaced Dr Edward Mbidde. Currently, Dr Orem has strong plans to revive the institute by involving collaborations with both national and international research teams and several projects are already in place. Furthermore, the Institute’s financial autonomy has been restored. 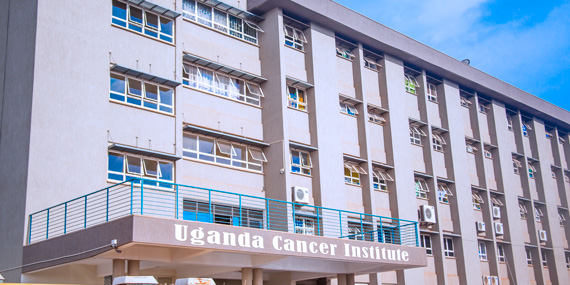 UCI receives 3.5acres of land from Muni University for constructing ...

Get Touch With Us